When looking to fill a position, you might hire someone because they would do a great job. Or you might hire them because they’re the mayor’s nephew, and pleasing the mayor will be good for business. In the latter case, you have hired a crony—a person who is there to provide social rather than pragmatic value.

Your beliefs about the world can be divided analogously.

Some of your beliefs are valued pragmatically: you hold them because they provide accurate information that can improve your wellbeing when acted upon. If you believe it might rain today, you will bring a raincoat. If you believe it takes 30 minutes to bike to work, you will depart at 8:30am to arrive by 9:00am.

These beliefs are held to a high standard. If one of them turns out to be inaccurate, you are likely to “fire” it immediately and replace it with a better one. When dealing with these beliefs, your mind is a meritocracy.

But you have other beliefs that are more like the mayor’s nephew. These beliefs are valued socially: you hold them because they signal to others the type of person you are. If you believe Taylor Swift’s music is mainstream drivel, you might appear cultured. If you believe that abortion is wrong, you might appear moral. (With such beliefs, it always depends who you are signaling to.)

Like the mayor’s nephew, these latter beliefs are not there to do a practical job—at least, not the one they have ostensibly been hired to do. They are there to help you play politics. They are crony beliefs, the subject of one of Kevin Simler’s most provocative essays.

Simler argues that crony beliefs explain some of the gravest and most common errors in our thinking. I find his argument persuasive, but the reason I often think back to his essay is for the lucid mental model it offers for thinking about how beliefs come to be. While social and pragmatic value might appear to be dichotomous categories, it makes more sense to see them as orthogonal dimensions: 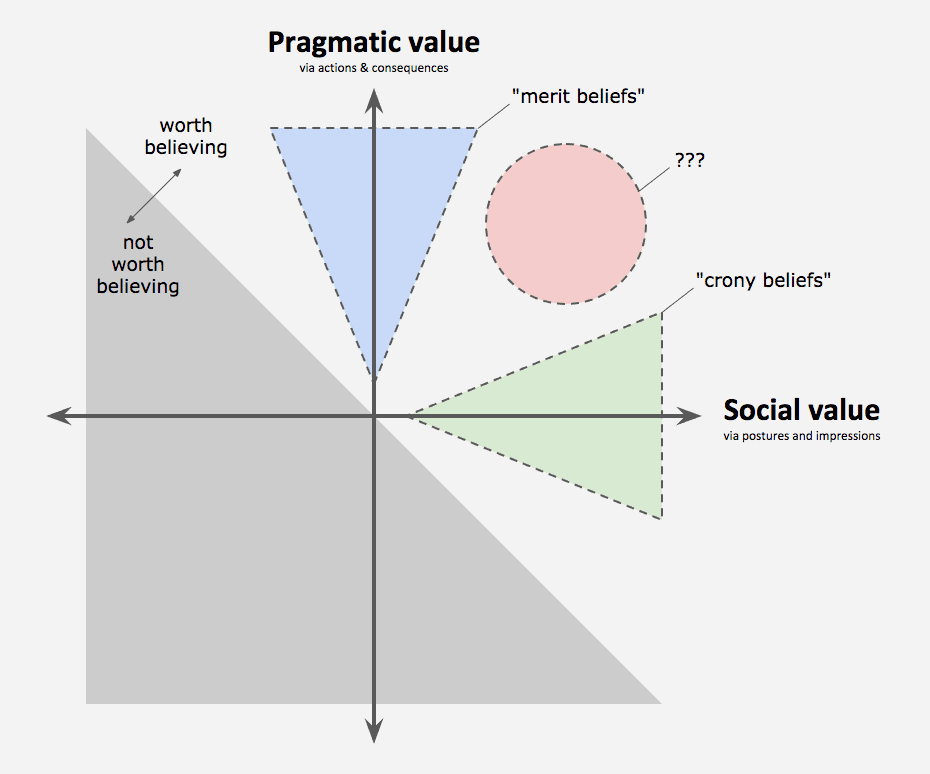 Just as the mayor’s nephew could genuinely be good at his job, your belief may have both social and pragmatic value. For example, you might believe that it’s wise to get a yearly flu vaccine. In many circles, this belief will score you some social points. And if it’s accurate, it will also diminish your risk of getting the flu this season.

Crony beliefs are not necessarily false, and ‘merit’ beliefs are not necessarily true. However, the more a belief seems to reward or punish you socially rather than pragmatically, the more you should raise your standards for believing it confidently. This is easier said than done, of course, since crony beliefs tend to get wrapped up in your identity. After all, that is precisely what they exist to advertise.