Incredibly, this passage was written in 1909. It comes from E.M. Forster’s short story The Machine Stops, which gives an eerily prescient account of contemporary life, particularly in the time of COVID-19. When a work of speculative fiction turns out to describe the distant future as comprehensively as does The Machine Stops, it deserves a close reading. Let me take you on a brief tour of the Machine, and we’ll see how it compares to our world.

Forster foresaw a world in which everyone lives alone, and few venture outside their rooms to interact in person. The Machine is a sort of massive underground human beehive that offers protection from the toxic air on the Earth’s surface. Every person lives alone in a hexagonal room through which the Machine provides their every need: food, entertainment, medical care, and the ability to communicate with others via video chats.

Beneath those corridors of shining tiles were rooms, tier below tier, reaching far into the earth, and in each room there sat a human being, eating, or sleeping, or producing ideas.

Forster’s dark premonition is thankfully more extreme than the world we live in. But even before the pandemic, we were trending more toward isolation than away from it. Since the publication of The Machine Stops, the prevalence of one-person households has risen logarithmically. 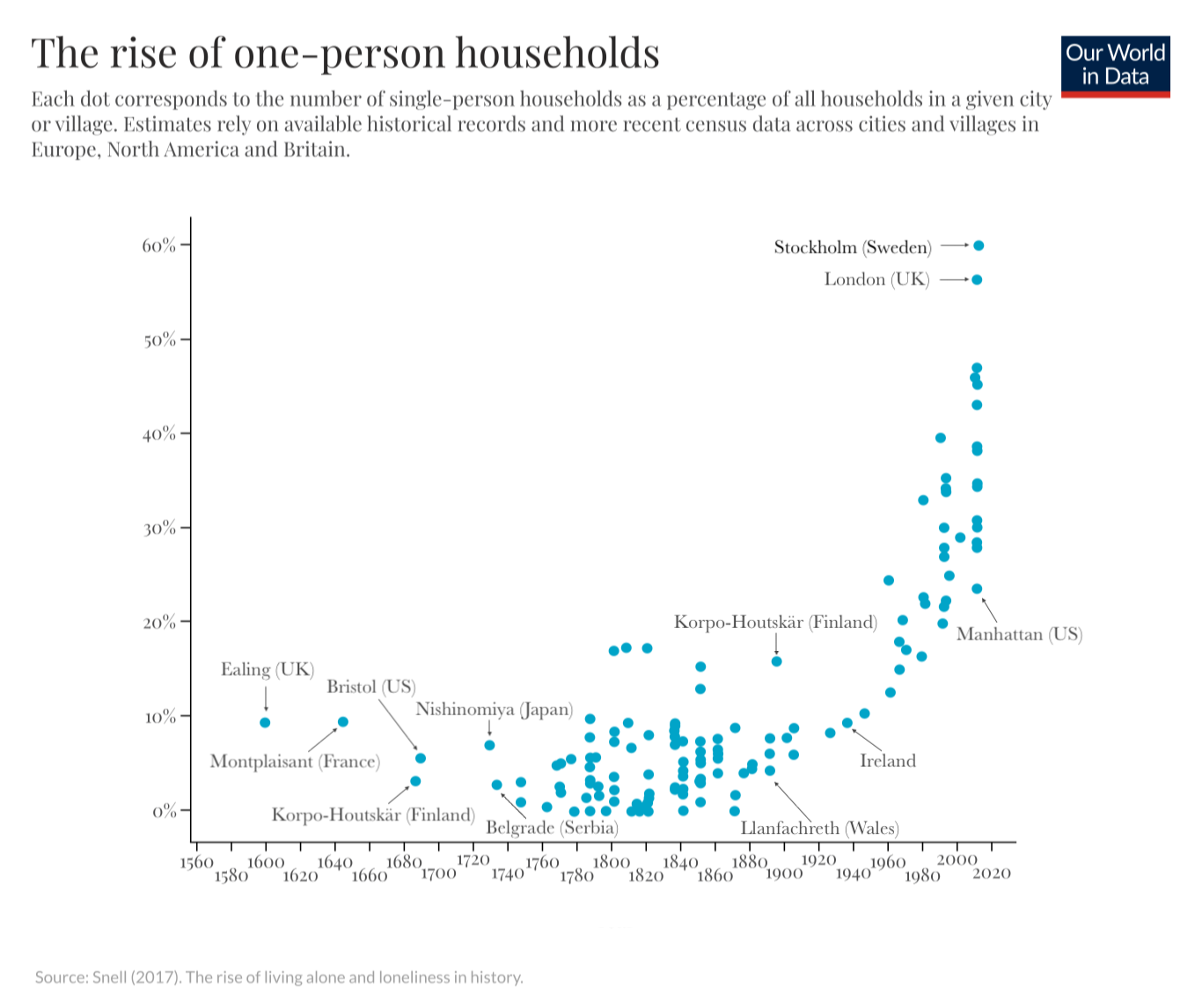 Forster’s world lies at the end of that sigmoid, and it’s a dark one.

People in the Machine communicate through tablet-like devices that transmit video and audio. These devices are good, but not perfect. One character notes that “the Machine did not transmit nuances of expression […] it only gave a general idea of people—an idea that was good enough for all practical purposes.” When giving a lecture, this character’s audience “heard her, fairly well, and saw her, fairly well.”

Forster paints a strikingly accurate picture of modern video conferencing software. While it’s getting better every year, video conferencing remains frustratingly low-bandwidth, relative to in-person communication. It doesn’t allow eye contact; it cuts out if the internet connection is weak; it doesn’t facilitate the use of 3-dimensional space. Yes, it’s perfectly serviceable “for all practical purposes”. But at its best, it simply allows us to see each other, fairly well, and hear each other, fairly well.

Decades before the rise of personal computing, Forster knew that advanced telecommunication tools would fail to convey the nuances of speech and touch.

People in the Machine aren’t forbidden from relocating, but few do:

Thanks to the advance of science, the earth was exactly alike all over. […] What was the good of going to Peking when it was just like Shrewsbury? Why return to Shrewsbury when it would all be like Peking?

Tyler Cowen worries in his book The Complacent Class about how Americans are less and less likely to move away from their hometowns. He writes in Time that “the interstate migration rate has fallen 51 percent below its 1948–1971 average, and that number has been falling steadily since the mid-1980s.”

Personally, I’m happy about the increasing availability of remote work. But in Forster’s imagination, geographic immobility implies stagnation and malaise.

Men seldom moved their bodies; all unrest was concentrated in the soul.

Social media has turned us all into remixers, arbitragers, and stewards of ideas. Nobody really says anything original anymore, and maybe that’s fine. Everything is a remix. Covers shouldn’t just be for musicians. Forster saw this coming:

“Beware of first-hand ideas!” exclaimed one of the most advanced of them. “First-hand ideas do not really exist. They are but the physical impressions produced by love and fear, and on this gross foundation who could erect a philosophy? Let your ideas be second-hand, and if possible tenth-hand, for then they will be far removed from that disturbing element—direct observation. Do not learn anything about this subject of mine—the French Revolution. Learn instead what I think that Enicharmon thought Urizen thought Gutch thought Ho-Yung thought Chi-Bo-Sing thought LafcadioHearn thought Carlyle thought Mirabeau said about the French Revolution. Through the medium of these ten great minds, the blood that was shed at Paris and the windows that were broken at Versailles will be clarified to an idea which you may employ most profitably in your daily lives.”

By the way, I sincerely hope you will share this article. I wonder what Forster would have thought about you telling your friends what you think I thought Forster thought about originality.

In what I hope is the least prescient part of Forster’s story, the Machine does stop, and the world ends. All his descriptions of this event are haunting, but one in particular stood out:

The sin against the body—it was for that they wept in chief; the centuries of wrong against the muscles and the nerves, and those five portals by which we can alone apprehend—glozing it over with talk of evolution, until the body was white pap, the home of ideas as colourless, last sloshy stirrings of a spirit that had grasped the stars.

I wonder: am I still part of that spirit that grasped the stars? Or am I “white pap”? Compared to the lives of our ancestors, ours are far less gritty. First we moved from the country to the city; now we are moving from the physical to the virtual. What will happen to our bodies in the next century? What will they be for, if anything?

I haven’t read much of Forster’s other writings, so for all I know he made hundreds of other fictional ‘predictions’ that didn’t pan out. But the point of this close reading is not that it gives us clues to our own future, although it may. The point is that it gives us something equally rare: a chronological outsider’s perspective on the present. A hundred years from now, our descendants might watch Black Mirror looking for our perspective on their world.

I enjoyed my day, but I know what Forster would think of it. I spent ten hours sitting indoors, listening to music, messaging with friends, producing second-hand ideas. Soon, I’ll make the room dark.


Pages that link to this page